Nicosia – the capital of Cyprus 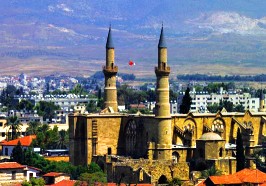 The first city, which you should visit on the island of Cyprus, is the capital, Nicosia. The City has about 200,000 inhabitants and is located in the central part of the island on the river Pedieos. Outside of the city you will see the Troodos mountain peaks which is the biggest mountain range of Cyprus, with the highest peak Mount Olympus at 1,952m.

Right through the center of the city leads the line which divided Cyprus into two Republics. It is still the capital and largest city of both Cyprus and the Turkish Republic of Northern Cyprus. Even today, the Turks called the city Lefkoşa and the Greeks as Lefkosia. However at present, the situation is not so difficult as before.

What to see in Nicosia?

View Nicosia – the capital of Cyprus in a larger map

« Tournai – 2nd oldest town of Belgium
Pienza – the model of the Renaissance town in the heart of Tuscany, Italy »