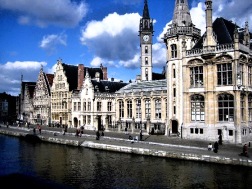 Gent is one of the most beautiful cities in wealthy Flanders and it is also one of the largest and richest cities of northern Europe. This nice city is situated at the confluence of the rivers Scheldt and Leie, and has numerous historical monuments. You can start right in the center of the town to the castle Gravensteen from the 12th century. If you look from its battlements you can see the intricate network of canals, but also landmarks of the city, which is definitely Belfry, Saint Bavo Cathedral, or Saint-Nicholas Church.

If you want a little rest and enjoy the atmosphere of the city you can not miss the waterfronts Granslei and Korenlei. At any time of day it is full of self-confident young people, mostly students of local universities, who will enchant you with their immediacy and helpfulness. Waterfront Granslei is typical for old guild houses with shields beautifully decorated, which are mirrored in the surface channel. Channels crisscrossing countless cruise ships full of curious tourists, which is the fastest way to experience all in an idyllic spot on the riverbank. If you get lost in small streets, you will be surprised by the number of caffes and many catering services for cyclists. Among other things, the Belgians take a bike as a natural means of transport anywhere in the office, on shopping, or on trips.

Much of the Gent’s medieval architecture remains intact and is remarkably well preserved and restored. The center of Gent is the largest carfree area in Belgium.

« Pienza – the model of the Renaissance town in the heart of Tuscany, Italy
Tomášovský výhľad – the most visited and popular destination in the Slovak Paradise National Park »