Perugia – the major center of Italian art and chocolate 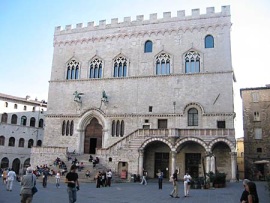 Perugia is the capital of the central Italian province – Umbria and is considered a major center of Italian art. Even if Perugia is surrounded by not very nice suburb and messy highway lines, it is hiding a beautiful old city with many splendid monuments. It is situated in central Italy, near the Tiber River, close to Assisi.

The city’s history dates back to the 10th century BC, when there was the first documented settlement. In medieval Perugia belonged to the papal state, and thus there arose numerous monuments. Today it is a modern city which keeps pace with the times and constantly growing. Modernization can be seen for example in city public traffic, even some minisubway was built here. It is one of the major university towns of central Italy and is visited annually by many tourists not only for its long history, but also the culture and traditions.

The town was named after a famous Italian painter Pietro Vannucci, who was nicknamed Perugino and who was born here. He was an teacher of the outstanding Renaissance artist Raphael. Among other things, he decorated the local hall the Sala del Cambio with beautiful series of frescoes, which are considered his masterpiece. You can admire other eight of his paintings in the Umbrian National Gallery. There lived more prominent artists such as Pinturicchio painter or architect Galeazzo Alessi in the city during the past.

The old center of Perugia is affected by Etruscans, Romans and medieval influences which creates a wonderful atmosphere. The main attractions are not close to the main square, but in the remote parts of the city. So before you go on the tour, take comfortable shoes, because you will do quite a long walk. Tour of the city can begin to the pedestrian zone Corso Vannucci, that crosses the medieval heart of Perugia. At the end of this street there is located Piazza IV. Novembre, dominated by the Fontana Maggiore that was built in 1277, created together by father and son, Nicola and Giovanni Pisano.

Right behind the fountain there is a Cathedral, which construction has started in 1345 and houses the tombs of two popes – Urban IV. and Martin IV. There is a painting of Madonna delle Grazie, which dates from the 15th century, and has a miraculous power. The chapel – Capella del Sant’Anello is also interesting.

The biggest dominant of Perugia is Palazzo dei Priori, standing on the corner of the square. It was built between 1293-1443 and there are four different sites. The first and also the oldest monument is the Sala dei Notari, which was the main meeting point for lawyers in the Middle Ages.

From the street Corso, you can go further west along the picturesque Via dei Priori, which is lined with several small churches and towers. By this street you can get to the Oratorio di San Bernardino that was built in 1475. The building facade is complemented by color, which is the work of Agostino di Duccio. The historic city center of Perugia is still marked by the influence of the Etruscans, after who the city walls have left here. In the walls you can see a few gateways with Roman elements, the most famous and best preserved is the Arco di Etrusco from 3rd century BC. Among the others there are such as the Porta Marzia or Porta Trasimena. By Corso Garibaldi you can get to the churches Sant’Agostino and Sant’Angelo.

An important landmark of the city is the Etruscan well and the church of San Severo at Piazza Dante. In the church there are paintings by the painter Raphael. The largest church in Perugia is San Domenico, where is the gothic tomb of Benedict XI. from the early 14th century. Also worth seeing is the cathedral of St. Lorenzo, the patron of the city. Its construction began in the 14th century, but it has never been fully completed. History lovers should not miss the Archaeological Museum in Piazza Giordano Bruno, which houses many different exhibits from the Roman and Etruscan period. You can finish a tour along Perugia at the beautiful church of San Pietro. You can also walk through the enchanting gardens like Orto medievale or Orto botanico.

In Perugia you can find many other beautiful monuments – palaces, churches, old graveyards or Etruscan cellars, but it is not everything. If you’ve heard the name of Perugina, so you know, it is a well known factory producing chocolate pieces, candy and sweets – the most popular are chocolate pralines Baci (kisses). In each praline you will find a famous quote about love or friendship. Eurochocolate feast takes place here each year in October to celebrate this great product.

Families with children will appreciate that the near of Perugia there is an amusement park, La Città della Domenica, where except of the attractions you can see wild animals, learn about exotic snakes or entrust the children into the hands of fairy tale characters.