Valletta – lots of historical sights in the capital city of Malta 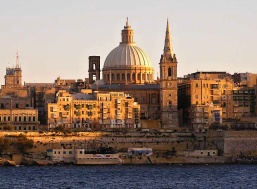 Valletta is the capital city of Malta with suburb of Floriana, situated between two magnificent natural harbors – Marsamxett Harbour and Grand Harbour. From all sides, it is protected by the strong walls, that made it as best defensive city in 17th century. The city is named after Jean Parisot de la Valette, who succeeded in defending the island from an Ottoman invasion in 1565. It is a city full of historical monuments. The center of Valletta is formed by circular square with a fountain of Triton.

Floriana has beautiful parks and squares and boasting the representative buildings occupied by the government ministry. But it is more appropriate for the serious history lovers, since it lacks a lively bustle streets of Valletta.

The main entrance to the fortifications of Valletta is City Gate, just behind that is the Republic Street, which stretches across the peninsula to its furthest end, to Fort St. Elmo, which is now a military museum. On the Republic Street there are major historical sights, most shops and the only two cafes in the city. Beautiful churches and palaces are in contrast with the military look of the city. Rising and falling streets are lined with houses that are decorated with beautiful bay windows and balconies.

What to see in Valletta?
When you go to Valletta, you should not miss its sights that are definitely worth seeing. Among the most interesting of them is one of the oldest buildings in town – Grandmaster’s Palace from 16th century. Today it houses the Maltese parliament, president and museum. Today it houses the Maltese parliament, president’s office and museum.

Another major attraction is fortification Fort St. Elmo, that played an important role in defending the island. It is now home to a voluntary army and a location of the National War Museum. St. James Cavalier is the strongest fortification of Valletta, now there is a cultural center with a cinema, theater and concert hall.

Memorial to victims of the second World War II we can see in the Lower Barracca Gardens. Another baroque building is the Co-Cathedral of St John, which dates from 1573 – 1578. Discreet Manoel Theatre building dates from 1732 and is the cultural heart of the island. One of the dominant features of Valletta is a the Church of Our Lady of Mount Caramel. This church was founded in 1573. The Upper Barracca Gardens offers a beautiful view of Grand Harbour, the marina and the “Three Cities” on the opposite shore of the Gulf.