The picturesque island of Capri lies in the Tyrrhenian Sea, in the Gulf of Naples. Not like the many islands in the vicinity, Capri has not been created by volcanic activity arose, but was separated from the Sorrento peninsula. The Blue Island – like Capri is often called – covers an area of about 10 km2. The island itself is composed of two parts – the Capri and Anacapri, which is located in the upper part of the island. 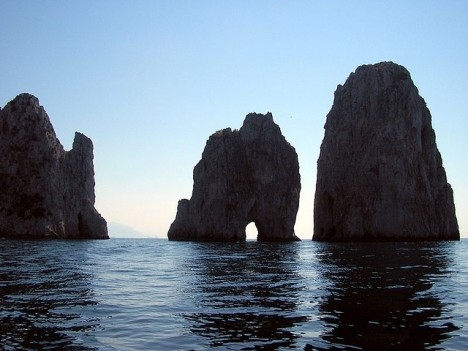 Photo licensed under the Creative Commons, created by Paul Resh

The island has been and still is for his position, and especially for its beauty and uniqueness, the seat of the higher society and artists. E.g. the Swedish writer Axel Munte spend here some part of his life. His Villa San Michele is now open to the public as a museum. In Capri you can find such villas and residences on each corner. One of the most famous – Villa Jovis – was built by Emperor Tiberius as his summer residence.

From the higher part of the island you can find a picturesque view of the entire magical panorama, but also of the Augustus Gardens and the magnificent white cliffs – Faraglioni. Near the town of Anacapri is the highest peak of the island, Solaro. 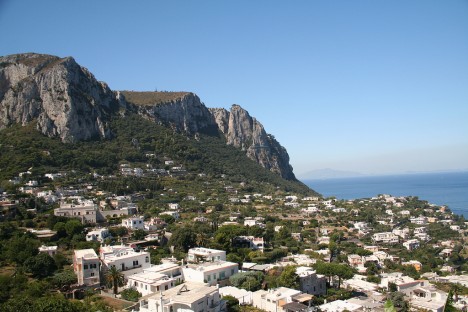 Photo licensed under the Creative Commons, created by Nenita Casuga

From the above mentioned information, it is clear that the island of Capri has a romantic beauty. But its uniqueness lies elsewhere – in the Blue Grotto (Grotta Azzurra) – the sea cave – magnet for the tourists. And indeed, when the lights switch off in a dark cave and you see the azure blue sea, you stop breath and enjoy a unique experience. The trip to the famous cave, although you will pay around 16Eur, is worth your visit. Tourists can reach the cave by bus or taxi from Anacapri; or by boat from Marina Grande.

Capri, it is not only the nature and beauty, but also a typical Italian countryside atmosphere. In the picturesque square in the Capri town you find many shops and boutiques selling souvenirs and other products of local production. Lovers of sea and water activities can visit the beach at Marina Piccola, or drive around the island tour on a boat ride (an experience for about 9 Euro).