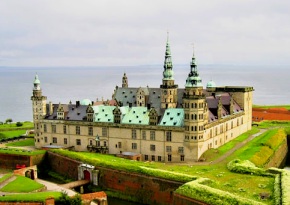 If you take the ferry from Helsingør to Helsinborg, it’s hard to miss the fortified castle of Kronborg at the coast. It became famous mainly because its corridors and rooms were used for William Shakespeare’s tragedy Hamlet. It is known as Elsinor in Shakespeare’s tragedy. That’s why the most of tourists are from England.

You can save a tour of the interior. After the fire, there is not much remained to be seen inside. It is best to walk along the sea and the view from the ship.

Kronborg Castle has been added to UNESCO’s World Heritage Sites list in 2000.