Home » Sights » Cities » Assisi – the city of the peace in Italy

Assisi – the city of the peace in Italy

Assisi is a town located in the central Italian region of Umbria and one of the most important pilgrimage sites in the country. It is linked with the life of St. Francis, who lived here from 1181 to 1226. The town is considered a historical treasure of Italy. 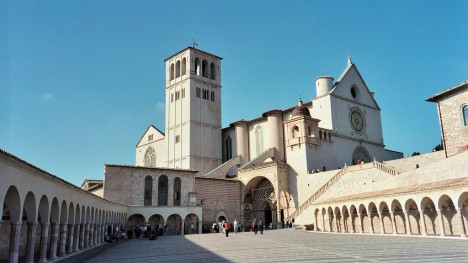 The town stretches along one side of Monte Subasio. A typical feature of Assisi are picturesque houses decorated with pink geraniums, narrow winding streets, small squares with fountains, a number of churches and other monuments from pre-Christian times. Visitors to Assisi can enjoy tranquility, comfort and cleanliness.

St. Francis of Assisi was born here in 1181 and later founded the Secular Franciscan Order. But the city has a much longer history. The city was inhabited already in around 1000 BC. From the Roman period there have been preserved several sights: city walls, forum, where is now the Piazza delle Commune, an amphitheater and the Temple of the Goddess Minerva where is now the church of Santa Maria sopra Minerva. From the original temple only the front face with 6 columns have been preserved.

Most sites, however, comes from the Middle Ages, when the city experienced its greatest prosperity, and was several times under papal jurisdiction. Among the most important monuments from this period are:

In Assisi there are much more beautiful religious buildings, which are definitely worth seeing. The main square of the city is already mentioned Piazza delle Commune, which was formerly the Roman Forum. Assisi is dominated by the medieval Castle of Rocca Maggiore, built in 1367 by Cardinal Albornoz. There is also the smaller castle in Assisi which was built much earlier, in the Roman era. However, only small part has been preserved and only three towers are open to the public.

The city offers to the visitors lots of cultural events. Most renowned festival is Calendimaggio, which is held here every year in early May. It presents the medieval way of life where you can see many actors of theater and dancing crews. Since 2000, the town of Assisi, is UNESCO World Heritage Site. Today there are living about 27.000 people.

In the city neighbourhood you can reach following destinations: