In the region of Umbria, in the central Italy, there is a picturesque historical town called Spoleto (Spoletium), which history stretches back to medieval times. It is a tourist attraction not only for its beautiful cathedral and a number of Romanesque churches, but also for the unspoilt surrounding countryside. 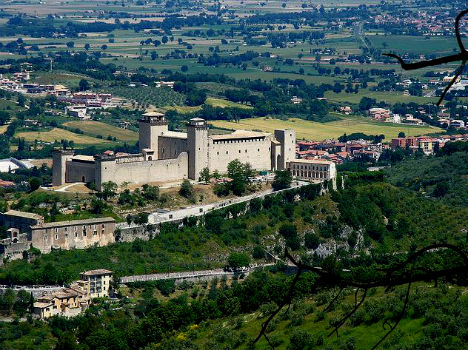 Photo licensed under the Creative Commons, created by pizzodisevo

Various archaeological findings show that the area of Spoleto was already inhabited in prehistoric times. Official establishment of the city dates back to 1000 BC. The town was founded by Umbri and later became an important Roman colony called Spoletium. Located at the head of a large, broad valley, surrounded by mountains, Spoleto has long occupied a strategic geographical position. It appears to have been an important town to the original Umbri tribes, who built walls around their settlement in the 5th century BC, some of which are visible today.

In 1155, Spoleto became the target of the army of Frederick I Barbarossa, and almost the whole town was destroyed. Around 1240 the town was claimed to be separated, but there was still influence of the Church. At the end of the 13th century the construction of walls began, which should protect the city, but also expand and define its territory. The part of the walls are still standing there.

In the 17th and 18the centuries there were some significant architectural modifications of the city. Wealthy aristocratic families called the renowned Roman architects to renovate their rich villas. A large part of the city was rebuilt at that time as well as the churches. These modifications play a crucial role in turning the city into the current view. Once the French occupation period ended, there was an unification of Italy and other revivals of the city. The political significance of Spoleto has been finished and the capital of Umbria became Perugia. 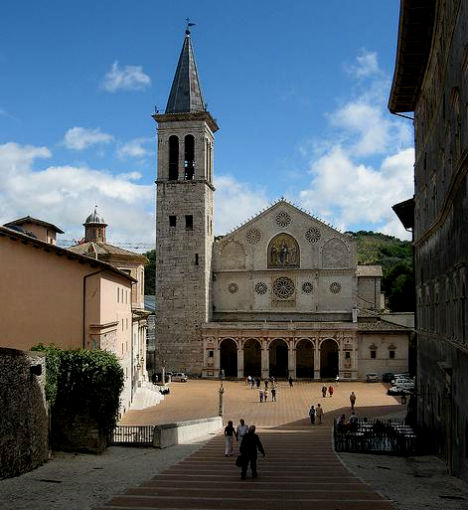 Now Spoleto is an interesting historical and cultural city, which is annually visited by thousands and thousands of tourists. Here you can find a number of architectural treasures, historical monuments, museums, as well as traditional cuisine restaurants called Osteria. Unforgettable cultural experience can be a “Festival dei Due Mondi”, which tradition has started in 1957. This is one of the largest art and music festivals in Europe. Always takes place in late June and July, attracting fans of music, opera, ballet, theater and visual arts. Spoleto is famous for the production of high quality and delicious taste of olive oil. The city is home to Monini’s family company, which deals with production of olive oil for several generations.

One of the streets you get to the Palazzo Comunale, which houses the Pinacoteca. It is important not only for its interior decoration, but also because it keeps the wonderful pictures. The same ticket gets you into the preserved Roman building – Casa Romana from the 1st century, which stands nearby. Then through cobblestone street you come to Piazza Campitello, which is just few steps from Spoleto’s most famous monument, the huge bridge Ponte delle Torri. The bridge was reportedly built on the ruins of an ancient aqueduct from Roman times and finished in 13th century. It is 80 meters tall and over 200 meters long. To the bridge you can get by following some of the many hiking trails that lead through the forest. 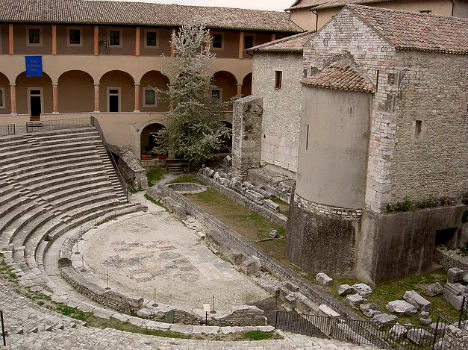 Photo licensed under the Creative Commons, created by Michela Simoncini

Another interesting monument of Spoleto is the Romanesque church of San Pietro from 12th century. On the facade you can see a Romanesque reliefs from the same period. At the heart of Spoleto there is the Cathedral from 1198. The interior of the cathedral was modified in the 17th century and bears the hallmarks of the late Renaissance. Besides the cathedral there is the campanile towering with a pointed roof.

When visiting Spoleto do not miss the Church of Sant’Eufemia, which is a jewel of Umbrian Romanesque architecture. The lower part of Spoleto city is mostly modern, began to form after being bombed during the Second World War. There are still three Romanesque churches – San Gregorio, San Ponziane and San Salvatore, which is one of the oldest Italian churches. Its interior was created in the 5th century according to the ancient Roman basilica.