Tartu – the oldest city in Estonia 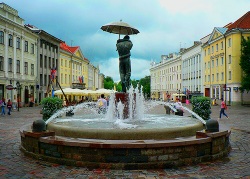 In this college town of Tartu with an amazing atmosphere you can see one of the most leaning buildings in Europe. Tartu is the oldest city and also the second largest city in Estonia. It lies in the southeast part of Estonia and it is said that Tartu is more Estonian than the capital city – Tallinn. Besides the rich cultural heritage it is also important technological research and development. The city played an important role for national liberation. Here in Tartu there were published newspapers and founded the first Estonian companies. On February 2 in 1920 a peace agreement between Russia and Estonia was signed here, in which Russia recognized the independence of the newly established state.

Tartu is a university town. The history of the local university dates back to 1632, and for centuries it has undergone a number of prominent personalities, such as W. Ostwald, owner of a Nobel Prize in chemistry. During the opening days, you can get into the university building. Except of the University Museum you can visit also a student cell. A small attic room looks like in the 19th century, where troublesome students were locked here as a punishment for violation of school rules, e.g.

The center of Tartu is Raekoja plats with the Town Hall from 18th century. Originally its tower was empty, the clock has been installed later to stop students from being late. At the northeast corner of Town Hall Square you can see the ‘Leaning House’ as the answer to the Leaning Tower of Pisa. This is one of the most interesting sights in Tartu. Just few streets away you find toy museum, full of dolls and teddy bears from all different parts of the world and historical periods. During your walk through Tartu, you can find many other attractions. Inside the students canteen you will discover the most beautiful student caffe in the world.

View Tartu – the oldest city in Estonia in a larger map