What to see in Copenhagen (København) – Capital of Denmark 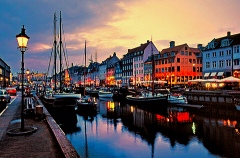 If you would go to Denmark and not visit Copenhagen, it would be like to go to Paris without seeing the Eiffel Tower. Copenhagen (København) – Capital of Denmark – is a beautiful city full of great monuments. Below you can find what places you cannot miss once you are in Copenhagen.

The capital of Denmark is located on the island of Sjæland, which lies east of Denmark. Half a million inhabitants live here and 600,000 others live in the metropolitan area. Copenhagen Centre, which is full of sights, lies to the very shores of the Baltic Sea.

Copenhagen is a royal city and really has a royal looking. You will find the seat of kings here, gardens, parks, many ancient churches, towers, and especially beautiful harbors. In the following sections we will present the most interesting places in Copenhagen.

Botanisk Have – botanical garden
Nature lovers shouldn’t miss this large botanical garden, founded in the late 19th century, which is full of all kinds of plant (both exotic or Danish). Through the garden leads many paths. In one section there is a beautiful stream with a rock, in others the lake with wetland plants. You should visit also a large greenhouse full of plants – most interesting is a greenhouse with orchids, cacti and palm house, where you can go to the top and see the palm trees from above.
There is no admission, the access is free.

Statens Museum for Kunst – national gallery
If you are art lovers, do not miss this gallery, which contains one of the most interesting collections of European art. You will find works by such artists as Rubens, Rembrandt, Picasso and Matisse, but the works of Danish painters as well.

Rosenborg Slot – Royal Palace
The royal palace is on of the symbols of Copenhagen. Without the admission fee you can enter the walls and see the Palace from the outside, or see it from the Royal Garden (Kongens Have). If you pay the entrance (40 DKK), then you can visit the underground treasure (where are the crown jewels), a marble hall, long hall, a Chinese salon, mirrored cabinet and stair tower.

Kongens Have – Royal Garden
This garden, immediately adjacent to the Rosenborg Slot, was founded in 1606 and is thus the oldest park in Copenhagen. You can find there beautiful roses, trees, fountains, and the various statues. One of the most famous is the statue of Hans Christian Andersen.

Kastellet fortress
Another well-known sight of Copenhagen is Kastellet fortress, which was founded in the early 17th century. This building, now open to the public, is interesting for the 5-pointed star layout, with an ancient windmill in one part. In the 19th century, the building served as a prison. Kastellet is now used by Danish army – you can meet the members of army inside.

Sankt Albans Kirke (church) and fountain Gefion
Beautiful church, called St. Albans Kirke, is built in Gothic style and it is located near Kastellet fortress. The church was built in the late 19th century and is located near the impressive fountain Gefion. This fountain is one of the most important sites of Denmark, although it was built in 1908. In the middle of the fountain there is a statue of the goddess Gefion, which has four oxen hitched to have a character from the famous Scandinavian legend.

“The Little Mermaid” is a fairy tale written by the Danish poet and author Hans Christian Andersen about a young mermaid willing to give up her life in the sea and her identity as a mermaid to gain a human soul and the love of a human prince.
Originally it was written as a ballet, the tale was first published in 1837 and has been adapted to various media including musical theatre and animated film.

The statue was commissioned in 1909 by Carl Jacobsen, son of the founder of Carlsberg, after he had been fascinated by a ballet about the fairytale. The sculptor Edward Eriksen created the statue, which was unveiled on 23 August 1913. His wife, Eline Eriksen, was the model.

The statue has been moved to Expo 2010 in Shanghai for the first time ever.

Amalienborg Slot – Royal Palace
Another of the royal residences in Copenhagen is Amalienborg Slot, which is the current official residence of Queen Margrethe II of Denmark. The Palace is the seat of the royal family already from the late 18th century. The palace consists of several buildings which in the middle of is the square with the statue of Frederic V. From this square you can see on one side the Amaliehaven park, which borders the sea and opposite the Marmorkirken church.

Kongens Nytorv – King’s new square
One of the most famous squares throughout Copenhagen is located in its heart. There are several interesting buildings. One is a theater – Det Kongelige Teater, where you can see drama and ballet. Then there is the Hotel d’Angleterre, which belongs to the most luxurious hotels in Scandinavia. Most interesting is Nyhavn harbor.

Nyhavn – New harbour
It is 300 meters long channel, from the 17th century, with beautiful color buildings on both sides. Nyhavn is a place where people love to meet, sit in cafes or on the channel trims and enjoy the atmosphere of this place. Many boats leaves from Nyhavn on scenic routes across the Channel and the coast (hour cost approx. 30 DKK).

Other important squares – Nytorv a Raadhuspladsen
Nytorv is another famous square, where you can see a fountain of Caritas Springvandet from the beginning of the 17th century. There is also Raadhuspladsen’s Square, which is the second largest square in Copenhagen after Kongens Nytorv. It is important because there is the so-called Raadhus Hall, built of red bricks in the early 20th century.

Tivoli – amusement park
Another frequently visited site is the Tivoli amusement park. Unfortunately, the entrance is about 100 DKK + 25 DKK per adult/trip. Park operates from April to late September, then on Halloween (which is celebrated here) and on Christmas.

Vor Frelsers Kirke – church
Other attractions of Copenhagen is the church with remarkable tower from 18th century. You can enjoy beautiful view from this tower. The total height of the tower is 90 meters and it is the second biggest view point in Copenhagen.

Christiania
Do not forget the Free State of Christiania, which is a special place of this city. It was founded in 1971, when squatters occupied several local branches of the barracks and the government decided not to intervene. Today there live nearly a thousand people and is certainly a place that attracts many people. Entrance to Christiania is free, but it should be noted that you can not make pictures there.

« Bärenschützklamm – the most impressive and the best developed gorge in Styria, Austria
The Poulnabrone Dolmen – another Stonehenge in Ireland »