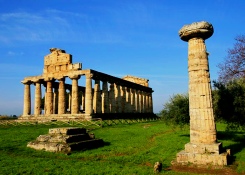 Paestum is a major European seaside resort and unforgettable tourist destination. It is also the main objective of the excavations for history lovers. Paestum is located in Campania region, about 40 km south of Salerno and 85 km southeast of Naples. Ancient Greek temples resemble the Athens’ Acropolis, and there is also a museum in which you can enjoy the rare pieces.

It is the most important architectural monument of Greek art on the Italian mainland. Greek colonists lived in Paestum already in the 7th century BC and called the town Poseidonia. Archeological discoveries confirm that the city was an important center of learning, full of temples, roads and rich buildings. It was founded by the Romans around the year 40 BC. At this time Paestum belonged to the prosperous cities of the Roman Empire.

In the Middle Ages Paestum (or Capaccio – as it was called) was abandoned for unknown reasons (historians are leaning toward the theory that it was due to malaria). The archaeological work that was carried out in 18th century (for an initial focus of Pompeii and Herculaneum) again showed this glory to the world and the city has enjoyed rediscovery. On 9th September 1943 the beach at Paestum became a landing place for the 36th American Division. Heavy fighting took place in the city nine days before the German were pushed to the north.

Thanks to archaeological discoveries, Paestum became a frequent tourist destination. Visitors can enjoy history together with a great opportunity to swim in the sea. The real tourist boom occurred after World War II, even though the city has undergone a difficult period of war. The city began to develop a robust tourism industry, which attracted visitors from all over the world. But not only the sea and monuments attracted to Paestum. It is also delicious cuisine and Nature (Paestum is located in the middle of the Cilento National Park).

Paestum has its own atmosphere and charm. You can sit in the numerous restaurants offering fish specialties in pizzerias and cafes. Come to Paestum and see that you will be very nice surprised!

You can also visit nearby Napoli, Pompeii or Capri island.