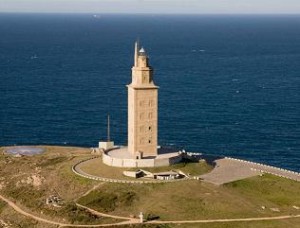 Torre de Hercules is an ancient Roman tower in Spain, which since its inception has served as a beacon. It is so far the oldest active lighthouse in the world. It is located in Galicia, A Coruña, about 2.5 km from the city center.

Torre de Hercules was already built by the Romans in the 2nd century. As already mentioned, it is still working, which makes it a unique monument. Torre de Hercules is 68 meters high; there are 234 stairs leading to the top. The lighting ensures a group of 4 lights that flash every 20 seconds and is visible up to a distance of 39 km. Torre de Hercules and this entire site is otherwise surrounded by a series of legends.

Around the tower Torre de Hercules there is the Statue Park, an open-air museum. There are more than 15 sculptures by major artists of the 20th Century, such as Francisco Leiro or Pablo Serrano. For local residents the most important sculpture is Breogan, which is the mythological father of the population of Galicia.

Thanks to its historical significance, Torre de Hercules is registered since 2009 in the UNESCO World Cultural Heritage.

Not far from tower you can also visit A Coruña, Santiago de Compostela, the Roman walls of Lugo city, Aquarium Finisterrae.