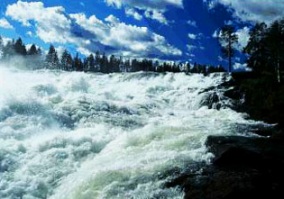 Storforsen rapids are not only the biggest rapids from the Nordic countries, but probably also in Europe. They are located in Sweden, in the northern part of the country, in the county of Norrbotten, about 40 km northwest of Älvsbyn.

Storforsen rapids are located at the River Pite. The rapids area is approx. 5 km in length and decreasing by 82 meters. The most interesting point is that at the last 600 m, the water is falling 50 meters down. During the biggest flows in the spring there are 1000 m3 of water passing per second. During the floods in 1995, it was 1200 m3 of water per second.