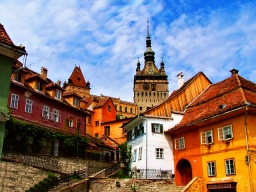 Sighisoara is one of the most interesting cities in Romania. If you should choose for your trip just one town, go there. It’s not a big city (approx. 32,000 inhabitants), but it is located on the main railway and most international trains are passing through it. Although Sighisoara at first glance looks like most Romanian cities (dug up, dirty and neglected), a closer look to show you that this is a really beautiful town. Sighisoara is located right in the center of Romania.

The city was founded sometime in the late of 12th century by rich Saxon merchants. Its strategic importance gradually grew and the fortifications were improved. Sighisoara is well known because of Vlad Tepes or Vlad III the Impaler (known as Dracula) was born here around the year of 1430.

Historical center is located on a hill, and it is thoroughly fortified. From the train station it takes for about 15 minutes to get there. At the courtyard there is the landmark of the city – Clock Tower, a 64m high tower built in the 13th century where is now museum. There is also Dracula’s family house, which is now one of the best (and most expensive) local restaurant.

There is a medieval festival in the courtyard and city events.

What else you can see in Sighisoara?