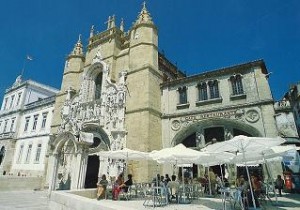 Coimbra is a beautiful historic city in Portugal. It is located in the central part of the country in the region of Braga, on the river Mondego. It has about 150 000 inhabitants. Coimbra mainly attracts tourists due to its monuments. In the past it was also the capital of Portugal 91139 – 1256), therefore it is also the birthplace of 6 Portuguese Kings.

Coimbra is famous for its university, which dominates the city. It is the oldest university in Portuguese-speaking world. It was founded in the 1290. Coimbra is divided into two parts, upper and lower town. Both of them offer lots of monuments. The main center of the lower town is the square Praça do Comércio. The main center of the upper town is the square Praça da República.

Among major attractions of Coimbra is the Cathedral Sé Velha, which was built in 1064 in honor of the victory against the Moors. Then it is a botanical garden, cathedral Sé Nova, founded by Jesuits in 1598, the church of Santa Cruz from 1131 and two monasteries, the Santa Clara-a-Velha and Santa Clara-a-Nova. Coimbra has many more sites, that you cannot visit in one day.

Coimbra hosts during the year many celebrations and festivals. Among the most important there is a student ceremony Quiema das Fitas, during which students are celebrating the end of graduation courses, symbolized by the ritual burning of the ribbons representing each faculty of the University of Coimbra (UC), it takes place at the second semester (starts on the first Friday of May at 00:00), being among the biggest student festivities in Europe. It lasts for 8 days, one for each UC’s Faculty: Letters, Law, Medicine, Sciences & Technology, Pharmacy, Economics, Psychology & Education Sciences and Sports Sciences & Physical Education. During this period, a series of concerts and performances are held, turning Coimbra in a lively and vibrant city. It also includes a parade of the university students, sport activities, gala ball, and many other public events and traditions, such as the historical nighttime student fado serenade (Serenata Monumental) which happens in the stairs of the Old Cathedral of Coimbra for a crowd of thousands of students, tourists and other spectators.

If you are planning your trip to Portugal, you shouldn’t miss Coimbra.