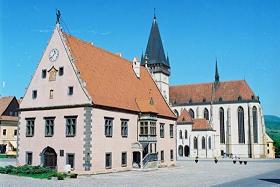 Bardejov is a historic city located in the north-eastern part of Slovakia. It is situated in the north of the valley in the Low Beskydy mountain. The first note of the town is from the 1241. Bardejov became a free royal city in 1376 and later in the 14th and 15th century also an important craft center. In 18th century Bardejov began to grow and use local medicinal springs and Bardejovske kupele spa has been created near the town.

In the town of Bardejov there are lots of historical monuments.

Major attractions include the Gothic parish church of St. Egidius from the 14th century. In the middle of the square there is the former Town Hall built in Gothic Renaissance style in 1511. Today it is a museum. In 1903 Saris Museum was founded there, where you can see numerous historical, natural and ethnographic exhibitions, and even the museum of icons.

We recommended to visit also a local spa together with the open-air Museum of Slovak village. Bardejov Town is on UNESCO World Heritage List since 2005. Today Bardejov has around 33000 inhabitants.

View Bardejov – historic city in Slovakia in a larger map