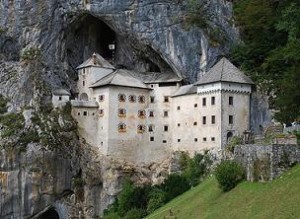 Predjamski Grad is the unique castle built within a cave mouth on the rock. It is located in southwestern Slovenia, about 9 km from Postojna Cave, above the river Lokva. Predjamski Grad was built on a high rock in the overhang.

The history of the castle dates back to the 13th century, when there is a first mention. At that time, a castle was built in Gothic style and was called Luegg. Today’s version of the Renaissance castle dates from the 16th century. In 1810 was Predjamski Grad owned by Count Michael Coronini von Cronberg. In 1846 the castle was sold to Windischgrätz family. They owned it until the end of the second World War II, when it was nationalized by the Yugoslav Communist authorities and turned into a museum, which is still located here.

Predjamski Grad has 5 floors. Today the castle is one of the biggest attractions in this area. Tours take place only in the summer and lead through the 15 rooms and a gallery. There are lots of various events in the castle such as the medieval tournament Erazem. Also you can make a wedding ceremony here.