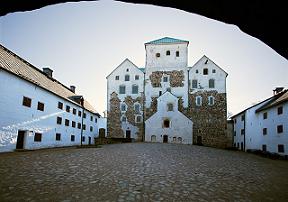 Turku is a port city located in the southwestern corner of Finland. It is situated on the River Aurajoki at the Baltic Sea. The city’s history dates back to the 13th century, when it was established. By 1812 it was the capital of Finland. Then Tsar Alexander I moved the capital to Helsinki. In 1827 the city was most affected by fire. Between 1960 – 1970 Turku is experiencing rapid development. In 2011, Turku becomes European Capital of Culture together with Tallinn, the capital city of Estonia.

The main local attraction is the Turku Castle built in the 18th century, where you can visit a historical museum since 1881. Other important buildings are Turku Cathedral or Tuomiokirkko from the 13th century, open-air museum Luostarinmäki, located in Mount Vartiovuori – it is a part of the city which has survived from the 18th century.

There is also Orthodox Church, Brinkhall Manor, Kakskerta church, an old mill in Samppalinna, Church of Archangel Michael from 1905, Martin church from 1921, Turku Art Museum, Museum of pharmacy and museum Ett hem or home to a typical Finnish houses from the 18th century. In Turku, there are several festivals – the most famous is music festival Turku and Ruisrock Festival. There are 176,000 inhabitants living in Turku.