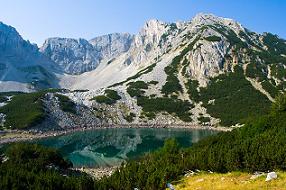 It is the home to many endemic and rare species of the Balkan Pleistocene flora. There are also lots of famous and popular ski resorts. Since 1983, the entire area of the Pirin National Park is listed on the UNESCO World Heritage List. Pirin National Park with its caves, waterfalls and glacial lakes should be included on your list of destinations if you are planning your visit to Bulgaria.

Visible is the impact of glaciers from the last Ice Age, which created deep valleys and numerous lakes. The rivers are fed from melting snow on the peaks during the summer as well. Water falls to the valleys in several beautiful waterfalls. Pirin, Rila and Rodopi together form the mass of the southern Bulgarian mountains. Pirin is interesting due to the fact that 45 of its peaks have an altitude of 2600 meters above sea level.

During the hiking to one of the peaks you can meet several islands of more-years-old snow, so-called firn, which is an intermediate stage between snow and glacial ice. As the Pirin National Park is relatively far from inhabited areas, many European wildlife species found their home here.

Pirin National Park has well-marked hiking paths and trails for the ski runs. You can choose the level of difficulty according to your physical abilities. However most of them belong to less demanding routes. Rest and food for tourists provide several huts, which offer the possibility of overnight accommodation in a beautiful and romantic landscape. The chalet Vichren, which lies at an altitude of 1950 meters can even be reached by car. From there, visitors can walk to the highest mountain peak in just 2-3 hours. The Pirin National Park has just very few tourists throughout the year, which also has its charm. The reason is probably its remoteness, but the park offers unique world of majestic mountain, which is certainly worth a visit.