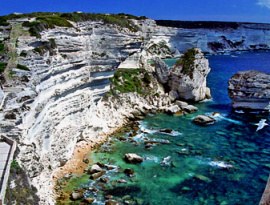 Corsica is an island located in the western part of Mediterranean Sea and belongs to France. With its area of 8680 km² is the 4th largest island in Mediterranean Sea. There are more than 250 thousand inhabitants currently living on the island of Corsica.

Corsica is the pearl of the Mediterranean Sea. It offers a beautiful diverse nature. There you will find high mountains with lakes and meadows with streams and creeks, as well as beautiful white beaches and clear sea. Parts of the island are registered on the UNESCO World Heritage Site. The best known is the Gulf Port, where is the Gulf Girolata, Cape Porto, and Scandola Nature Reserve. These sites provide habitat for protected plants and animals such as gulls, cormorants and sea eagles. Gulf Port is therefore registered on UNESCO World Heritage List since 1983.

Among the most important monuments on the island of Corsica is a prehistoric menhirs and dolomens, mountain cascades, and the historic city of Bonifacio.