Travel via Europe - Find out more information about Europe on travelviaeurope.com! 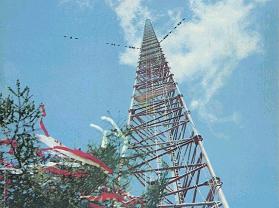 Transmitter has been designed for long-broadcast of the first program of the Polish Radio (PR1). Broadcasting was captured in Kazakhstan, Iraq, Iran, almost all of Europe and North America. Official name of the station was Radiofoniczny Ośrodek Nadawczy w Konstantynowie, Radiowe Center Nadawcze w Konstantynowie or Warszawska Radiostacja Centralna (WRC) w Gąbinie.

The collapse of the transmitter mast

In 1984, during a technical inspection of the mast, the damage was discovered. The reason was vibrations of the construction caused by wind. Technical problems during the change led to build a new, stronger structure, but the idea was not implemented for economic reasons.

On 8th August 1991 at 19.10 hours during the exchange of grounding ropes, that were in poor conditions, the mast collapsed. Upper part of the mast broke and hit the base, lower one then broke in the opposite direction. The collapse led to the destruction of a small crane but none of the transmitters or substation buildings were damaged, no one died or was injured.