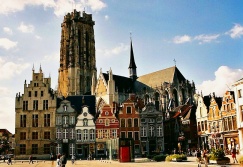 Mechelen (Malines in French) is a charming historic city which became in the 16th century the capital of the Netherlands for some time. It is located on the banks of the river Dijle in the northern part of Belgium, about 25 km north of the capital, Brussels. It lies 25 km from the city of Antwerp as well in the Flemish region of the country. Mechelen occupies approximately 80 000 inhabitants. It is the tenth largest city in Belgium.

Mechelen is situated in the “Flemish diamond” area, a densely populated part of Belgium, among the Antwerp, Brussels, Ghent and Louvain (Leuven). Found Artifacts from the period of La Tene, prove settlement already in the Iron Age (400 BC). Later there were Gallic-Romans in Mechelen and after those there were Germans.

In the 8th century, under the influence of Irish missionaries and preachers St. Rumbold, the residents went to Christianity. St. Rumbold’s Cathedral – Gothic cathedral is one of the landmarks of the city, built between 13th to 16th century, and has 97m high tower with two bells. The Cathedral is registered on UNESCO World Heritage Site.

From the 16th century it comes another important landmark of the city, Small and Large Béguinages (Begijnhof), a unique complex of buildings belonging to Beguines, which is a UNESCO World Heritage Site.

Mechelen is a picturesque town with its typical atmosphere of winding streets, shops and cafes with a strong Belgian coffee or hot chocolate. In the center you will find a market where you can buy sweets. The best place for shopping is the square Ijzerenleen, which was famous in the Middle Ages for its fish market.

Another interesting tourist place in the city of Mechelen is the square Grote Markt, where you can find a statue of Margaret of York, and three current City Hall buildings: the late Gothic Paleis van de Groote Raad from 16th century, Gothic Belfort from 14th century and Lakenhal from 14th century. The square is surrounded by Renaissance buildings from the 16th century, rococo houses from the 18th century, and is dominated by the already mentioned St. Rumbold’s Cathedral.

In Mechelen you can find many other religious buildings, such as the Baroque basilica Basiliek van Onze-Lieve-Vrouw-van-Hanswijk and other churches.

In 1835, the first railway on the European continent was built between Brussels and Mechelen.