Agrigento – the richest group of well-preserved Greek temples in the world | Sicily, Italy 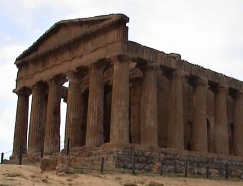 Archaeological Area of Agrigento is located in Sicily, Italy. It lies on the southern coast, near the city of Agrigento. The place is also called Valley of the Temples (Valle dei Templi). This is the most impressive ancient Greek site outside of Greece.

Agrigento Greek colony was founded in the 6th century BC but already in 406 BC the town was destroyed by the Carthaginians. Until now there are still well-preserved ruins of ancient town.

The local archaeological area of Agrigento is the richest group of well-preserved Greek temples in the world. You can find here the remains of buildings from the later Hellenistic and Roman periods.

Since 1997, the archaeological area of Agrigento is registered on the UNESCO World Cultural Heritage.

View Agrigento – the richest group of well-preserved Greek temples in the world Sicily, Italy in a larger map