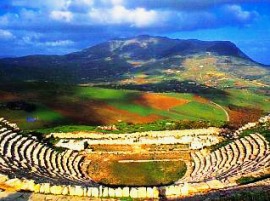 Segesta is a town located in the northwestern part of Sicily, in the province of Trapani, approximately 70km southwest of Palermo. It is former center of Elymian people – one of the three indigenous peoples of Sicily. They built Doric temple here in the 5th century BC at the edge of a deep canyon, however the temple has never been completed.

The ancient town is really well preserved. The monument complex contains also a smaller ancient theater, located on the hill of Monte Barbaro, from which you can enjoy the beautiful views of the Castellammare del Golfo.

At Segesta’s archaeological park, there’s a shuttle bus to take you from the parking area to the amphitheatre and urban excavations. The nearest locality is Calatafimi. During Summer, several classical Greek dramas are performed at Segesta’s ancient amphitheatre, but many of these productions feature actors and actresses wearing casual clothes instead of classical costumes.