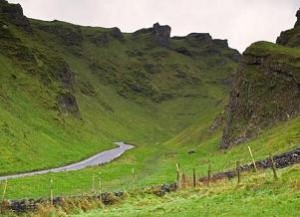 Peak District National Park is the oldest national park in United Kingdom, located in the middle of England, less than 35 km southeast of Manchester.

Peak District National Park was designated in 1951 and consists of two distinct types of landscape. The first type is located in the southern part of the park, called the White Peak, and is characterized by undulating limestone terrain. In the northern part – Dark Peak there are the wild moors and heaths.

Peak District National Park is interlaced with numerous hiking trails with beautiful vantage points – for example, Hathersage, from which you can get a panoramic view of the northern moorland or Edale, from which you can see the winding trail Pennine Way that is 412 km long.

Probably the biggest tourist attraction of the Peak District National Park is Arbor Low – stone ring, called the “Stonehenge of north”. The ring consists of 46 laying stones surrounded by a moat from 2000 BC.

Another beautiful place is Dovedale. In this southern part, the Peak District National Park is densely forested along with the most beautiful river valley, which is dominated by steep cliffs. The site is suitable not only for romantic walks, but also for fishing.

Thanks to limestone bedrock, the Peak District National Park is characterized by caves, such as Thor’s Cave or Treak Cliff Cavern.

But the Peak District National Park is not only about beautiful nature, you can meet lots of historical artifacts and ruins in many places, such as Alport Castle or Peveril Castle. One of the entry points for the park may be a picturesque spa town of Buxton, which opera house is due to its location in the beautiful surroundings of the town called “theater in the hills.” Another entry point can be Cromford village, which boasts the first cotton mill in the world, which used water power.

Peak District National Park also offers a unique tram museum in the town of Crich, where you can ride the old trams from around the world.

« Matera – one of the oldest settled place in Italy
Monte Cinto (2706m) – the highest mountain of Corsica island, France »