Home » Sights » Cities » Taormina – the beauty made by human and nature in Sicily, Italy

Taormina – the beauty made by human and nature in Sicily, Italy

Taormina is a small Italian town, located at the north-eastern part of Sicily island, between Messina and Catania. It is considered to be one of the most popular holiday destinations in Sicily. It lies between two wide bays, high on the hill of Monte Tauro. The proximity of both the sea and snow-covered volcano Etna, makes Taormina a very attractive place. Nature scenery and historical monuments attract travelers since the Middle Ages. Main Street consists of a number of palaces built in the 15th to 19th century. 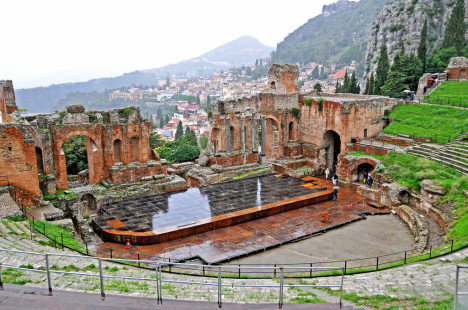 The most important monument of Taormina is the Greek theatre Teatro Greco, built in the 3rd century BC, rebuilt later by the Romans in the 1st century BC. Theatre offers a magnificent view of snowy Mount Etna and the sea coast. During the summer there is a popular Art Festival in Taormina.

The city also offers other historical monuments such as Odeion – used for music shows and recitation. Another monument is the Palazzo Corvaia. On the Piazza IX Aprile you can find Torre Dell’Orologio built in the 12th century, with a terrace offering views of Mount Etna and the bay. You can visit a fortress of Castelo Saraceno which is still situated on the hill of Monte Tauro, not far from the town of Taormina. 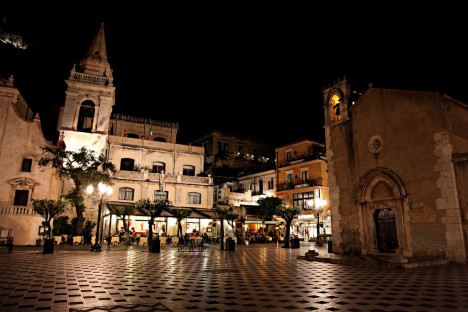 Coast around the town is very attractive as well. You can find beaches, caves and rocky bays here. Currently, the city has about 11,000 inhabitants and if you are heading to Sicily, never miss this great Sicilian jewel.