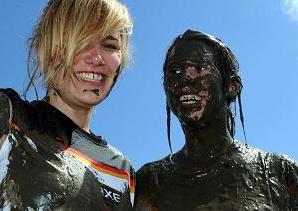 The Mud Olympics with Wattstock Music Festival in Germany is a famous music festival that usually takes place in late August in the Brunsbüttel town, located on the north-western part of Germany, and lies on the mouth of the Elbe river.

There are several sport games during Olympics where everyone can join (if you reserve places in advance) e.g.:

The dates for 2011 are the weekend of July 23rd with the music festival on Saturday 23rd July and the Mud Olympics on Sunday 24th July.

These are the German mud olympics; “Wattolümpiade Brunsbüttel” The most popular event is mud football. There’s also mud skiing and bicycle races. Prizes are provided for sporting performances, prizes are awarded in such bizarre categories as Funniest Team Name, Best Fans, and Funniest Team.

If you want to see the craziest mud festival in Europe, do not miss this opportunity.