Port of Rotterdam – the biggest port in Europe | Netherlands

Rotterdam is situated on the coast of the North Sea, it is the second largest city and second most important city in Netherlands (after Amsterdam). Here you can find the Port of Rotterdam which is the largest port of Europe and recently it was the largest in the world, until it was overtaken in 2004 by port in Shanghai and then by port in Singapore. 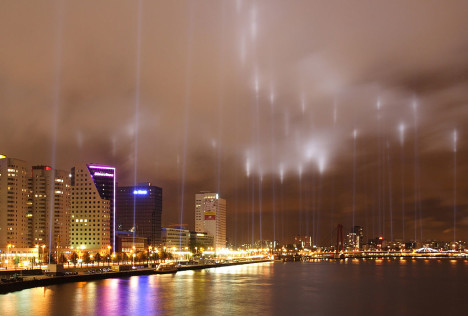 Fireline of the Rotterdam, commemoration of the May 1940 bombardement by Nazi Germany by Trebaxus

The port of Rotterdam has 105km2 and stretches over a distance of 40km. The largest ocean-going ships have unrestricted access to the port for 24 hours a day, 7 days a week. A sea depth in the port is 24 meters, which allow access to any ship.

More than 500 regular shipping lines connect Rotterdam with over a thousand ports around the world. For many smaller European ports serves as a container transshipment.

Goods coming into Rotterdam in the morning, may be, for example in Germany, Belgium, France or Great Britain on the same afternoon. One of the main advantages of Rotterdam is its location at the mouth of the rivers Rhine and Maas. The result is efficient and economical use of transport by rivers and canals deep into the heart of Europe. 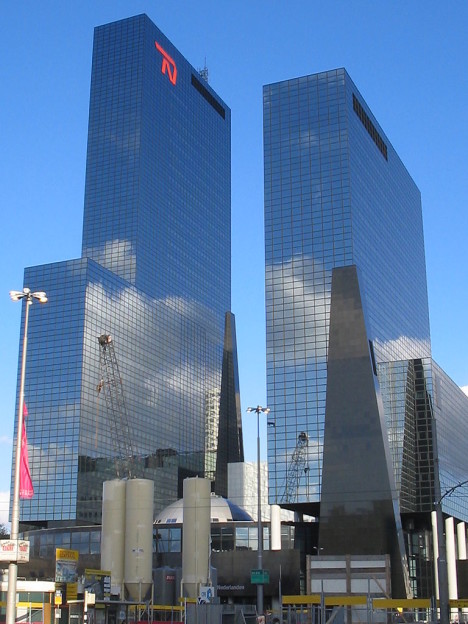 The metropolis is surprisingly quite different from other cities in the Netherlands. The port of Rotterdam was very important already during the World War II and therefore it was totally destroyed. The city was not renewed again like lots of other Holland cities, but it was built from the scratch. Rotterdam is now a city of skyscrapers.

When you go to Rotterdam, you will be surprised by the transport system. The density of highways is unbelievable, have many lanes, there are a large number of highway intersections. Roads are built on bridges and raids in several levels. If you saw the transportation system of the Japanese and North American cities, so it is exactly here. Moreover, everything is illuminated at night. Tunnels are not an exception.

« Caltagirone – the stairs to heaven in Sicily, Italy
Canyon del Sil – one of the most beautiful river canyons in Spain »