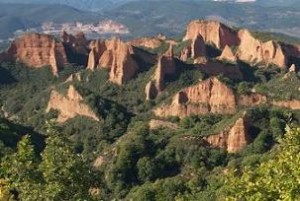 Las Médulas was in the Roman Empire the most important gold mine. It is located in Spain, just few kilometres from the town of Ponferrada, near the borders with Portugal.

The mining started already in the 1st Century. The Romans used the hydraulic mining technique. After two centuries of extremely profitable mining the Romans departed and left here a devastated landscape. But after centuries it has changed and now the country looks so much impressive that in 1997 was Las Médulas registered by the UNESCO as one of the World Heritage Sites.

Even today you can still see a mining operation there, at non-forested slopes, that are full of steep rocky bits in orange or almost red color. According to Pliny the Elder, it could be extracted about 1,650,000 kg of pure gold during the 250 years of mining.

Villages in the area of Las Médulas belong to the poorest in Spain. Once you come here you will feel that the time totally stopped. The buildings are abandoned and dilapidated, young people left to large cities. Just after including the area to UNESCO the first tourists started to arrive. Local residents are very sincere and offer their domestic products, especially wines, liqueurs and cheeses.