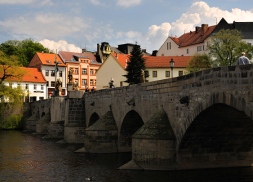 Older brother of Charles Bridge, the oldest bridge in the Czech Republic and rarest in Central Europe. These are several names of a stone bridge in the south Bohemian town of Písek, which was built in 13th century. Thanks to the reconstruction in 1998 the bridge survived a disastrous flood in 2002 when the river achieved 2m above the bridge and still connects the two banks of Otava river. Its most common name is Stone or Old Bridge.

Gothic bridge with baroque statues achieves a length of 109.75 m and the width of 6.25 m. It stands on the six pillars of granite blocks and has seven arches – six circular (from the original Gothic structure) and one segment. There were originally two bridge towers, but unfortunately, none of them has been preserved.

The bridge is decorated with sandstone sculptures from 18th century.

« Biggest Ice hotel in the world – Sleep well in -5 °C | Sweden
Zoo Schönbrunn – the oldest zoo in the world and best zoo in Europe | Vienna, Austria »