Pena National Palace – one of the Seven Wonders of Portugal

Pena National Palace or in Portuguese Palácio Nacional da Pena is a Romanticist palace situated at the top of the rocky hill in the town of Sintra in Portugal. When the weather is good the palace is visible from Lisbon. The palace is since 1995 a UNESCO World Heritage Site and one of the Seven Wonders of Portugal and it is also one of Portugal’s most visited monuments. 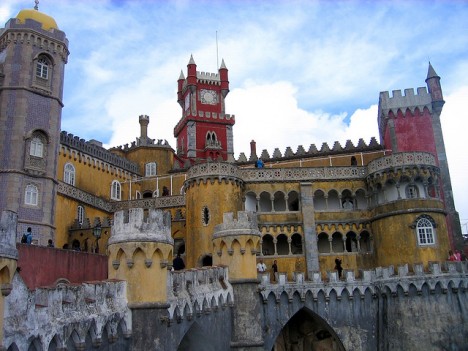 Photo licensed under the Creative Commons, created by leoplus

Pena National Palace was built in 19th century but its history started already in the Middle Ages when a chapel was built here and later in 1493 also monastery, however it was severely damaged by lightning and later by the Great Lisbon Earthquake of 1755. After that only ruins remained here for many decades. King Ferdinand started reconstructions and rebuilt the place into a summer residence for the Portuguese royal family in 1847.

Pena National Palace is now a place of Portuguese government and president officials. Around the Palace there is 200 hectares large vast forest with lots of paths.

« Zoo Schönbrunn – the oldest zoo in the world and best zoo in Europe | Vienna, Austria
Magdeburg Water Bridge in Germany – the longest navigable aqueduct in the world (918m) »