Windsor Castle in England – the longest-occupied castle in Europe 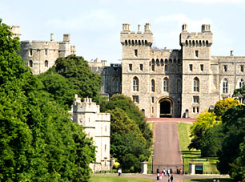 Windsor Castle is the medieval castle and the oldest royal residence in Great Britain. It is located in the southeastern part of the country, about 10km west of London.

Windsor Castle dates from the 11th century. Originally it was built of wood by William the Conqueror in 1070, as the protection of western routes into London. Over time, Windsor Castle has been rebuilt several times. Most buildings were built during the reign of King Henry II. and Edward III.

In the 20th of the 19th century King Henry IV. adjusted some of the buildings. In 1992, Windsor Castle suffered a devastating fire which broke out during the maintenance work in the ceremonial chambers. Today, the area is restored again.

The oldest building, which boasts the Windsor Castle is the wooden Round Tower, built by William the Conqueror. In 1170 the tower was rebuilt to a stone one, and remained so until now. In the Round Tower there is now a royal archive and photographic collection.

Probably the biggest gem of Windsor Castle is St George’s Chapel, built between 1475 – 1528, in which are the remains of 10 kings. St George’s Chapel is one of the finest examples of late Gothic style in England.

Windsor Castle is now the main residence of the Queen and her family, but it is also open to the public and is a very popular tourist destination. The length of the guided tours in interiors depends on the presence of the royal family in the castle. For safety, all the visitors have to pass the inspection. Windsor castle offers the tours every hour, but most visitors are viewing the site separately with audio-visual guides that are available for free.

Windsor Castle has, just like any major office, its own guards, that change regularly, which is also very popular attraction. The visitors are also attracted by the beautiful adjacent park suitable for relaxation after a demanding tour of the castle.

Windsor Castle is a real gem and certainly worth seeing.