Home » Sights » Cities » Cēsis – the most beautiful town in Latvia

Cēsis – the most beautiful town in Latvia

Cēsis with almost 20.000 inhabitants, lying at the northern part of Latvia on the Gauja river, is considered the most beautiful and the most Latvian city in the country. Cēsis boasts a rich history, many monuments and numerous cultural institutions. It became a popular destination for tourists from all over Europe.

The history of Cēsis town dates back to 1205, when the castle and many other smaller fortified buildings were built here by German crusaders known as the Livonian Brothers of the Sword. The first settlement began to emerge here around the castle and soon Cēsis became the capital of Order’s Master. At that time the city belonged to the Hanseatic League and even had the right to mint coins. Cēsis is also likely birthplace of the Latvian flag. The history of the red-white-red flag is not clear, and Latvian flag is one of the oldest flags in the world. 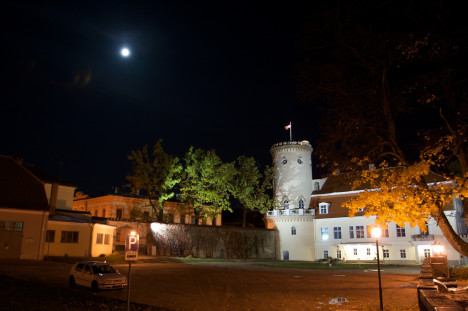 During the 16th and 17th century, almost the entire town was destroyed by wars, fires and the damage was completed by the Russian occupation. Although the city was destroyed several times, it was still reconstructed.

Cēsis has also become the place of one of the most important battles of the Estonian and Latvian War of Independence. Although Latvia’s independence was proclaimed in 1918, but the Soviet Union did not agree. Latvians had to fight for their freedom, so together with Estonia they created common army with 8000 soldiers and fight in Cēsis against Baltic Land Defence with 6000 soldiers. The battle lasted as long as five days, but finally Estonians and Latvians won important battle of independence.

Currently the city benefits from the development of tourism and not only Latvians, but also foreign guests. It boasts several historical monuments, the most important is undoubtedly an Old Castle built in the 1209. It was built of bricks and its dominant features are two large towers at the west end. The West Tower was the mightiest with the walls of 5.25 meters strong, in which there were the offices and rooms of the castle lords. The South Tower was the highest one with five floors and 32.5 meters height. The core of the castle is formed by the central courtyard, which was previously surrounded by residential buildings. In the vicinity of the castle now stands few half-timbered houses.

In 1960 the castle underwent extensive reconstruction, during which there were found three skeletons of women and two children and about 6500 other items. The castle is situated in a spacious Pils park by the river Gauja, and is partially open to the public. Castle park covers an area of ​​65 hectares and is decorated with beautiful, even though dilapidated statues. The park also includes the singing fountain, lake, Russian Orthodox church and a stage for various cultural events. On the opposite side of the park there is situated local brewery Cēsu Alus, in which beer is brewed since 1590. It is the oldest brewery in Northern Europe.

Near the Old Castle is now a “New Castle” from 18th century, which has a typical salmon-pink color. It houses Latvian History Museum.

Another interesting sight is the Gothic church of St. John, from the late 13th century. Originally it had a Gothic look, but it gradually changed over the centuries. Its three-aisle basilica is 65 meters long, 32 meters wide and 65 meters high. The church houses the organ from 1907, that is equipped with 2000 whistles.

In the centre of Cēsis you will find Vienibas laukums square with lots of beautiful buildings and excavations as well.