In the heart of the island of Malta you can find city of Mosta, which is one of the areas with the longest history. It is a small and very nice city with just 17,000 inhabitants and full of historical monuments. Since it is not overcrowded with tourists, you can enjoy a clean and unspoiled Maltese culture here. 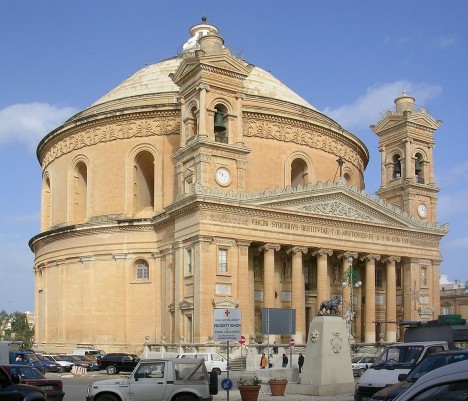 Mosta is a peaceful city where you should spend at least few days of your holidays. Although it’s far away of the sea, this “lack” is replaced by the great number of monuments, the city look, nice atmosphere, many restaurants, shopping and entertainment centres. Mosta can be regarded as a quiet place, perfect for relaxing. On the streets you meet mainly Maltese, therefore the life here is not adapted to the hectic tourist style. Mosta is famous for a popular Beer Festival, which is regularly organized each summer. On the streets you can hear modern music and see the people dancing and the whole atmosphere is really unforgettable.

The symbol of Mosta is monumental parish Church of the Assumption of Our Lady known as Mosta Dome or simply Rotunda. It is the work of George Grognet de Vasse – the Maltese architect of French origin, who was inspired by the Roman Pantheon. The building is clearly visible from almost all parts of the island. It is the fourth largest dome in Europe and the third largest unsupported dome in the World.

Construction of Mosta Dome on main square began in 1833 and was completed about forty years later. The building was associated with many problems – perhaps the biggest problem and the most hated by the people was its circular ground plan, because the church looked like a pagan or a mosque. Mosta Dome began to be built as a shell over the older church, which was during the construction normally in operation until 1860. Another problem was lack of funding, therefore cupola was established without scaffolding.

At the entrance to the Mosta Dome you will be amazed of richly decorated interior. Ceiling is very similar, and similarly impressive as in the Roman Pantheon. Very beautiful is especially the main altar and paintings by renowned Maltese painter Giuseppe Cali.