Hohensalzburg Castle – one of the largest medieval castles in Europe | Austria 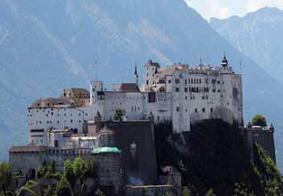 Hohensalzburg Castle, landmark of the Mozart city – Salzburg, is the largest and also very well preserved castle in Central Europe. Hohensalzburg Castle was built as a fortress in 1077 by Archbishop Gebhard von Helfenstein. Archbishop Leonhard von Keutschach (1495 – 1519) extended the fortress, and gave it the present form. In the long history of the Hohensalzburg Castle, the castle has never been conquered. However during the Napoleonic Wars, surprisingly, the defenders surrendered without a fight.

Today Hohensalzburg Castle is open to the visitors during the whole year. Particularly interesting is the medieval royal room and the castle museum. For a tour around the castle complex from 11th century you will need more time. There is also a palace Hohe Stock, Church of St. Georg or several different towers. In the local Gothic rooms you can join the unique concert with candlelight. Since 1892 there is a cable car (Festungsbahn) in operation, which can help you to get up to the castle easily and quickly.

During 20th century Hohensalzburg Castle became one of the most visited attractions in Austria.