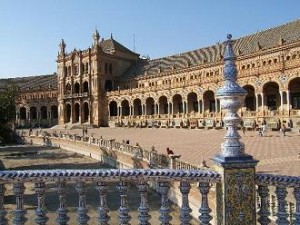 Sevilla is a capital and largest city of Andalusia, which is one of 17 autonomous communities in Spain. It is said that Sevilla is the most Spanish city of all cities in Spain. The city had a great history, therefore it has much to offer to visitors. In addition, the southernmost region of Spain – Andalusia is very interesting in many aspects.

Today Sevilla has about 700 000 inhabitants. Like the most of the country, also Sevilla was for a long time – the whole 500 years – under the rule of Muslim Moors, who left indelible traces here. The name Andalusia comes from the Arabic “Al Andalus”, which was an Arabic name given to a nation in Iberian Peninsula under Arab domination. This term was derived from the Vandals, who inhabited the area at the turn of the 4th and 5th century.

When the Muslims were defeated in 1248 by King Ferdinand III. and 300 000 of them were driven, perfect Moorish architects and builders were still employed by the Christians. The city thanks them e.g. for the symbol of the city, minaret Giralda, Alcázar – romantic castle from the 14th century, but also for many other oriental buildings and beautiful gardens in the Arab style.

But Christians probably did not want to humiliate, and thus in the year of 1401 they began to build a huge cathedral, saying: “Let us build such a great cathedral that everyone who sees it, regarded us as crazy.”

At the site of a former mosque they built Cathedral of the Virgin Mary for over 100 years. It is built in Gothic style from the outside, but it was influenced by the Renaissance from the inside. Now it is the third largest cathedral in Europe and one of the most admired local tourist magnets – also for a fact that the famous navigator Christopher Columbus is buried here.

View Sevilla – heart of Andalusia Spain in a larger map

Bullfighting is characteristic for the city of Sevilla. The first bullfight match took place in Sevilla around the year 1750. Later there was built one of the grandest arenas here, called Plaza Toros de la Maestranza, which can host around 12,500 visitors. Another favourite entertainment is Flamenco, typical Andalusian music and dance. Although flamenco is today for many a symbol of Spain, its creation came from the mixture of Gypsy, Jewish, Arab and others.

So if you want to see the bullfights and flamenco, the best time for your visit would be during some of ceremonies or festivals. Sevilla offers a number of interesting museums and other attractions, like the old Jewish quarter with non-Jewish name Barrio de Santa Cruz, Plazza de Espana square with arcades and malls, and more. Perhaps everyone comes into his own here.

View Sevilla – heart of Andalusia Spain in a larger map