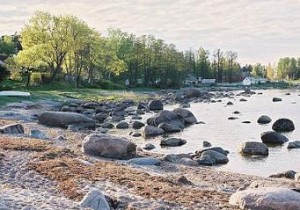 In northern Estonia at an area less than 700 km2 lies the largest and oldest national park in the country – Lahemaa National Park. The park was established in 1971, as the first national park in the former USSR, in order to preserve many local natural places, but also a number of historical, archaeological and cultural sites.

Protected area in this region existed long before the establishment of the park, but the Soviet authorities were afraid of leading Estonians to nationalist ideas. Only after years of preparation and lobbying they have finally reached an agreement. After this, also Latvia and Lithuania in the years 1973 and 1974 declared their national parks.

In translation, the Lahemaa National Park means “Land of Bays.” At present it is one of the most popular tourist sites in Estonia, with about 300,000 tourists a year. Most of them come here in high season. But the park has a unique atmosphere also during off-season, it is then transformed into a magical and unspoilt countryside. Lahemaa National Park is a home to 838 kinds of plants and 50 species of mammals. You can meet here brown bears, American mink or lynx. In the trees there are 222 kinds of birds and in the rivers you can find salmon or trout.

Lahemaa National Park is situated at the coast of the Gulf of Finland, where several deep incisions create one bay after another. Sea coast is very rugged. National park icludes also four major peninsulas and the series of islands. About 480 km2 of the land is covered by forests, remaining 220 km2 are the waters of the Gulf of Finland.

Lahemaa National Park is a typical example of the Estonian countryside, it is mostly flat or slightly wavy to a maximum height of 115 meters above sea level. A large part of the park is occupied by marshes, moors and forests. Travelers will find fourteen lakes and several waterfalls that drop down from the rock cliffs from a height of about 60 meters. Lakes are either coastal or ice type. The park offers a lot of interesting places, however, one of the most attractive are typical stone fields, which were brought here by Scandinavian melting glaciers.

The area is very quiet and populated mainly with rural population. Apart from the natural scenery there are also many historical and cultural monuments. Near the eastern end of the park you can find a renovated castle in Palmse dating from the 13th century. In the years of 1677-1923 the entire territory belonged to the Baltic German family von der Pahlen. But the castle was later nationalized and used as a recreational facility for Estonian National Guard called Kaitseliit. The reconstruction works on the castle began after the establishment of a national park in 1971.