The Great Synagogue – the biggest synagogue in Europe | Hungary 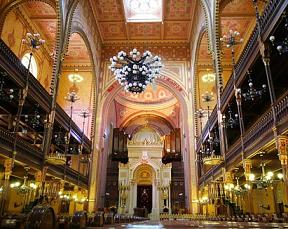 You can find The Great Synagogue in the 7th district of Budapest – on Dohány street. This is why the synagogue is known also as Dohány Street Synagogue. The building is 75 meters long and 27 meters wide and accommodates up to 3,000 seating worshippers. It consists of three chambers and according to Orthodox tradition it has a separate gallery for women and men. Ornate interior of the synagogue is the work of Hungarian architect Frigyes Feszla and some elements are clear ideas of Reform Judaism. One example is the placement of the stage for Torah readers.

The facade of the synagogue is decorated with a large rosette. It is located between two richly decorated octogonal towers, which are typically accompanied by onion-shaped domes. Above the rosette there is the Hebrew inscription of the Second Book of Moses. The facade is composed of strips of white and red bricks.

Austrian Jewish journalist Theodor Herzl was born at The Great Synagogue, who became the most important representative of Zionism, and later became the spiritual father of Israel. There was a museum founded in 1931 at his birthplace house, where is located the extensive collection of historic relics, the Jewish objects of everyday needs. Exhibits date from the periods of ancient Rome to the present. A very valuable book for example is the Burial Society Chevra Kaddisha from 1792. The museum was previously attached to the main building and is now open to the public throughout the whole year. One separate room is dedicated to the memory of the Holocaust.

The Great Synagogue in Budapest is one of the most venerated synagogues in Europe.