Home » Sights » Religious monuments » The Cathedral of Monreale – one of the greatest treasures and most important attractions of Sicily, Italy

The Cathedral of Monreale – one of the greatest treasures and most important attractions of Sicily, Italy 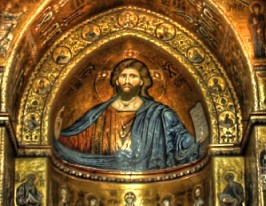 The town of Monreale has today around 25 thousand inhabitants. Thanks to its location near the Sicilian capital city, Monreale has almost become one of the turbulent suburbs of Palermo. But if you visit this site, you should definitely visit The Cathedral of Monreale, which is thanks to its mosaics one of the greatest treasures of this Italian island.

View Cathedral of Monreale on the Larger Map

The Cathedral of Monreale is a kind of monument to Arab, Norman and Byzantine art and architecture. Its construction began in 1172 at the instigation of King William II, who wanted to use the cathedral as his tomb, after his death. Therefore, a court architects tried to overcome other royal temples. Not only the building itself, but also the decor was influenced by French, Islamic and Byzantine designs. The cathedral is a massive three-nave building, 102 meters long. However, it looks quite modest from the outside. West facade is, except of the portal to the ornate gates, very curt. Cathedral is in addition covered by a largely urban area with an adjacent monastery.

You can see the beautiful bronze door from 1186, which are decorated with 42 biblical scenes. There are features of a lion and a griffon here, which were symbols of the Norman royal family. On the left side of the church you can see another bronze door from the year 1179, which are mainly influenced by Byzantine art. But the main attraction is the cathedral’s interior.

So if you’re interested in art and history, the Cathedral of Monreale should really be included on the your must-see list.

View The Cathedral of Monreale – one of the greatest treasures and most important attractions of Sicily, Italy in a larger map