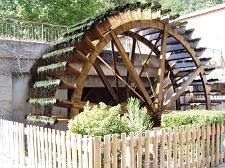 On the islands on five arms of the river Sorgue there is located a beautiful medieval town of L’Isle-sur-la-Sorgue, which is due to its location often called the “Venice of Provence“. Center of town is surrounded by water channels and you will find here eight large wooden water wheels.

The water appears almost everywhere in this picturesque medieval town full of water mills. Already in the 12th century a few fishermen came here with their families. However everywhere around there was a swamp. Therefore, the first local settlers were forced to build their houses on piles. The water from the marshes were drained into the channels soon and on the Sorgue river were built water mills. The captured energy was used for the processing of silk, wool, and also for the manufacture of handmade paper. Thanks to this, L’Isle-sur-la-Sorgue soon became the center and the most important city of Venaissin-Comtat area (Provence-Alpes-Côte d’Azur today). Several of these water wheels, which ensured the prestige of the city are still spinning here.

L’Isle-sur-la-Sorgue boasts many beautiful sights. Especially picturesque buildings you will find on the streets Rue du Dr. Roux, Jean and Rue Jean-Théophile. In the heart of the medieval city there is a tower Tour Boutin, sometimes also called the Tour d’Argent, which is the oldest building in town. It was built at the time when L’Isle-sur-la-Sorgue was ruled by the Counts of Toulouse. However the purpose of this tower is not known.

Another important building is near standing Chapel of Notre Dame des Anges, which was built in the 1222. In the 17th century, it was reconstructed and re-built into Italian style, which ranked it among the most beautiful baroque buildings in Provence. The windows on the north side had to be bricked up in 1666, due to cold winds, which are regularly blowing. Also the interior of the church is worth seeing! Over the altar that is made of Carrara marble there is a picture of “Assumption of the Virgin Mary”, painted by Reynaud Levieux in 1630.

In many homes you will find souvenir shops for tourists. At the waterfront of Sorgue river there is an antique market every weekend, which is the 2nd largest of its kind in France after that one in Paris.