Zell am See – one of the most beautiful places in Austria 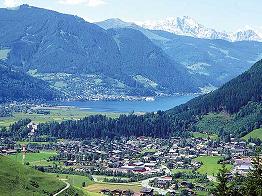 Zell am See is a beautiful mountain town, located on the western shore of the lake Zeller See. It is a popular resort for summer and winter sports. Its location between the lake and mountain Schmittenhöhe makes it one of the most beautiful places in all of Austria.

Already in 740, Salzburg’s monks founded a settlement at this place called Cella Bisontio, which ensured them prosperity mainly in salt trading. Local people were moving the salt on mules through Hochtor to the south, where they changed it with the wine. Hochtor is a place lying now on the high Alpine road Grossglockner Hochalpenstrasse, which was completed in 1935 and begin at Bruck, about 4 km from Zell am See. In 1348 the village acquired the right of market town, but the real boom came up with the railway which was built here in 1875. This developed a tourism and mountaineering here.

Zell am See is the capital city of the Zell am See district in the Salzburger Land (the Austrian state of Salzburg). It is situated at an altitude of 757 meters and has around 9700 permanent residents. The town is surrounded by massive mountain giants, reaching heights of about 3000 meters above sea level. This stunning surroundings not leave visitors rest and certainly not hiking lovers. Winding streets full of shops, restaurants and Zell am See hotels offer pleasant atmosphere. Also history lovers can admire many sights in Zell am See.

The oldest building is a tower Vogturm built probably at the end of 10th century. Tower is also sometimes called Kastnerturm, according to trader Johann Kastner, who bought the tower in 1866. In its interior there is now a small museum of local history Heimatmuseum. A major monument of Zell am See is also a parish church of St. Hippolyte from 11th century, which was rebuilt several times over the centuries and in 1770 to its current Baroque style. Inside the church there is a Gothic altar and the frescoes from the 13th and 14th century.

City Hall can be found in the Rosenberg Castle, built in the late 16th century. It has the four corner towers and a circular central tower. The town is located not far from the another castle Prielau from the 15th century, which currently operates as a luxury hotel.

Nearby mountain Schmittenhohe (1965 meters high above sea level) is also a popular tourist site. You can climb up on your foot, a hike will take about 3 hours, or take a lift and then enjoy the view of the snowy peaks of the Hohe Tauern. They are around 3000 meters high – e.g. Grossglockner and Großvenediger. Mountain Schmittenhohe is ideal starting point for hiking and in the winter it is a great place for skiing.