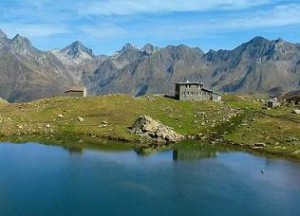 Pyrenees – wild, scenic and beautiful. This mountain range forms a natural border between France and Spain and in spite of many civilization shoots it is still among the best preserved nature areas in Europe. However its steep cliffs, snowy peaks and deep valleys attract still more and more tourists and on the wild rapids of the rivers there are more boats and rafts, the Pyrenees still have a touch of wildness and secrets.

It is obviously desirable to maintain this natural wealth into the future. The part of the Pyrenees even got to the UNESCO World Heritage Site thanks to its uniqueness. It is an area around Mont Perdu, which limestone massif rises to a height of 3352 meters above sea level. The total area covers 31,189 hectares, although it was initially smaller. The first entry was made in 1997, and the protected area was enlarge three years later. It is also a place of the oldest Spanish National Park with long name Parque Nacional Valle de Ordesa – Monte Perdido, founded in 1918 on an area of ​​20.5km2 and later extended. On the French side it has a younger partner, the Pyrénées National Park established in 1967.

On the Spanish side there are two largest and deepest canyons in Europe. On the French side you will find three great glacials. These geological formations are accompanied by mysterious caves, clear water lakes, deep forests and colorful meadows.

In terms of human life, the landscape of Mont Perdu is such a kind of window to the past. The farmers live in almost the same way of life as before, that was formerly common in all mountainous areas of Europe.

The most impressive canyons are mainly Ordesa, Pineta and Añisclo. You can choose from many hiking trails of varying difficulty, from very easy ones to the downright climbing. But you have to be prepared that the hiking trails can be challenging and sometimes a bit awkward. This applies to certain trails called “fajas” that lead over ledges along the canyon, but more to the trails “clavijas” that leads through the steel steps at the steep rock walls.

Everywhere you see something interesting and very diverse, ranging from bare rock to almost impenetrable vegetation.

The highest summits of Pyrenees are Pico d’Aneto or Pic de Néthou (3,404 metres), Posets peak (3,375 metres), Mont Perdu or Monte Perdido (3,355 metres). You will find here also the highest waterfall – The Gavarnie, which is the tallest waterfall in France, and one of the most impressive and highest waterfalls in Europe.

In winter the mountains are great place for alpine skiing.