Millau Viaduct – the tallest bridge in the world | France 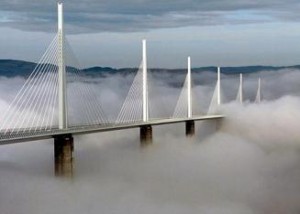 When you drive through the French A75 highway which connects Paris with Barcelona, you cannot miss the technical gem in the form of the highest bridge in the world – Millau Viaduct. The bridge crosses the valley of the river Tarn in southern France and was designed by French bridge engineer Michel Virlogeux in collaboration with the British architect Lord Norman Foster. The bridge was officially opened in December 2004.

The Millau Viaduct serves to the speed up and calm the traffic. Before its construction it was necessary first to descend into the valley and then climb again on the other side, which greatly slowed down the transport, and meant a significant traffic load in the valley.

The Millau Viaduct consists of 8 road fields, supported by seven pillars, which have the shape of an inverted Y. The road is 2460 m long and weighs 36,000 tons. Each field is 342 meters long (2 outer field has a length of 204 m), in the middle of these fields there is a pillar. 90 m high pylons rise above the road (each weighs over 600 tons) and with ropes keep the roadway between the pillars. A maximum height of the road above the ground is 246 meters.

The actual construction work began in October 2001, but weather conditions greatly complicated the construction which finally lasted for 3 years.

Millau Viaduct is not only the tallest bridge in the world but also the world’s longest cable-stayed deck.