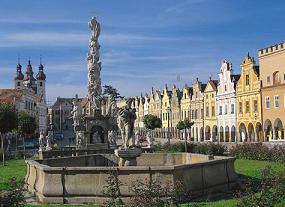 The territory of Telč was, according to archaeological excavations, inhabited already from ancient times. Exact time when the settlement was founded is not clear. Local legend says that it happened after the victory of the Moravian Duke Otto II. over the Czech Duke Břetislav in 1099. Impressed by this event, the victorious monarch founded the chapel and later also a church and a new settlement, the Old Town today.

However the first written document of the Telč dates back to the 1315. In 1334 Karel IV. (at this time as Margrave of Moravia) paid the mortgage of this municipality, and a few years later (1339) he replaced it by the Castle of Bánov, that belonged to Jindřich of Hradec.

The family of the new owner then established a new Telč. Unfortunately, the Memorandum has not preserved, but the first written report of Telč Burgess comes from 1353. It is assumed that it was Menhart of Hradec, who in 1354 built a castle, church, water fortification and Gothic houses (originally wooden) around the perimeter of a large marketplace. Other buildings and lake were built progressively.

Telč is a fascinating blend of architectural styles, and on many houses you can see a gradual evolution from Gothic style through Renaissance to Baroque style, in some cases also the later styles. The best example are the Gothic houses on the square, some with well-preserved typical pointed arches. They have Renaissance facades with beautiful gables, decorated with frescoes and paintings on the walls, or a baroque and rococo sculptures. The square is also decorated with two fountains and the Marian column.

Until now, well-preserved are also the medieval walls and city gates, the castle and other monuments, such as the former Jesuit college from 1655 (now high school).

The town of Telč is listed on UNESCO World Heritage List since 1992.