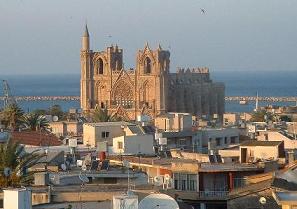 Famagusta, located at north-eastern part of the island of Cyprus, was formerly one of the richest and most famous cities in the world. This can be prove for example by the fact that even William Shakespeare situated his drama Othello to this city. Tourists can visit many of impressive temples here from the 16th century, when the Famagusta was under Ottoman rule.

Famagusta was founded in 300 BC and its original name was Ammochostos – “burned down in the sand.” Large expansion of the city occurred in the late 13th century, when the first refugees settled here from the Holy Land. In this period, the first churches and mosques were built here in Famagusta.

Another boom came with Genoese and Venetians, and with their commercial potential. In 1571, Cyprus was controlled by the Ottomans. Today, the area of Famagusta is full of history and ancient architecture, but it also offers tourist services, beautiful beaches and romance. For sport lovers it is important to remind that Famagusta has quite a strong football team.

The city and surrounding worth a visit. Famagusta offers sights like the city walls with the most beautiful place of the Citadel, which offers a stunning view of the city.

You can also visit a mosque, Lala Mustafa Pasa Cami – former Cathedral of St. Nicholas from the late 13th century. As the whole Cyprus, also Famagusta boasts archaeological site – site of Salamis, where you can access gymnasium, baths, theaters, porticoes and the Basilica from 4th century.

Very interesting is also the district Varosha with Greek Cypriots that live here. During the occupation in 1974 lots of people leaved, and many people are still unhappy to see the abandoned houses.

Akrotiri and Dhekelia are two British military bases on the island of Cyprus. Great Britain kept those two areas after the declaration of independence of Cyprus in 1960. Akrotiri is located on the southern island of Cyprus, near Limassol, Dhekelia is in the southeast of the island between the towns of Larnaca and Famagusta. Akrotiri has an area of ​​123 km². Dhekelia has an area of ​​130 km². In both areas there live more than fifteen thousand people.