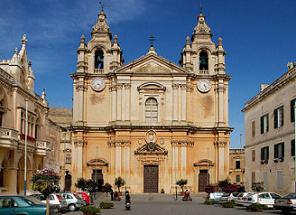 On the south-western part of the island of Malta there is the town of Mdina, which was the capital of Malta until the mid-16th century. However Mdina is not capital city any more the city didn’t loose anything of its fame. Today it is one of the largest and most visited tourist destinations in Malta, acting almost as a museum.

The city’s history dates back to somewhere in the 200 BC, when it was strategically advantageous area at an altitude of 185 meters above sea level, inhabited by the Romans. They built massive walls around the settlement and built a city named Melita. Later also the palace, where they placed the headquarters of the government.

In 870 Mdina was occupied with the Arabs and was divided into two parts. The central part was surrounded by walls and deep moat, and was renamed Medina, which in Arabic means “city”. The remaining part called Rabat, which is now an independent city, or more like a suburb of Mdina. Due to the walls, Medina was not able to expand further, therefore, it remained almost unchanged. After leaving of the Arabs its name was changed to the original one – Mdina, and even today has the character, who in the 16th and 17 Century imprint Maltese nobles, which I later withdrew from the island.

In 1571 Valletta became the capital of Malta and Mdina was further often referred to as the Citta Vecchia (Old City). This name comes from the Middle Ages, when this place was home to many aristocrats and their descendants from Norman countries, Spain and Sicily. Many people at that time left the city, but most aristocratic families still lived in their residences. This made it possible to maintain their homes still in its original beauty. Most of the buildings in Mdina dates back to the 14th and 15th centuries. The paradox is that most younger baroque monuments were destroyed by an earthquake in the 1693.

Today Mdina is a traditional city with only less than 400 permanent residents. The town is called “Silent” or “Silent City”. It is caused by the fact that it is forbidden to enter the city walls by any motor vehicle. The city is ideal for walking and relaxing. Mdina is, with the city of Rabat, very attractive place, especially for the history lovers. You can walk through the ancient streets or enjoy spectacular panoramic views of Malta from the city walls.