Fontana di Trevi – the most beautiful fountain in Rome | Italy 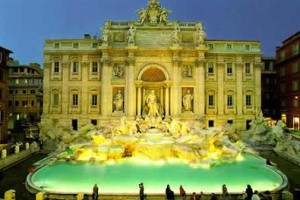 The most beautiful fountain in Rome is undoubtedly the Fontana di Trevi, and with its height of 25.9 m and width of 19.8 m it is also the largest fountain in Rome. This amazing work of art decorated with baroque marble sculpture is one of the most famous symbols of Rome.

Fontana di Trevi is located at the junction of three waterways, at the place where the aqueduct was in the past, which supplied water to Rome. The first fountain was built at this place already in 1453 by Pope Nicholas V. The water was supplied from Acqua Vergine aqueduct, which was created by Marcus Agrippa in 19 BC. Fountain, which is here now, was inspired by an arch of Constantine – one of the last great monuments of Imperial Rome, standing in the shadow of the Colosseum.

The construction of Fontana di Trevi lasted 30 years, from 1732 till 1762. The main architect was Nicola Salvi, who designed it for the Pope Clement XII. The name of the fountain is derived from three narrow cobblestone streets that are crossing here – “tre vie”, which means three streets. The fountain is carved of marble and in the middle of the fountain there is Titan of Water, Seas, Lakes, Rivers, Oceans, Streams and Ponds – Oceanus.

The dominant of the fountain is a high arch di Trionfo called “Kingdom of the oceans.” In 1998 the fountain was reconstructed and equipped with circulating pumps.

Fontana di Trevi also appeared in the film made by Frederico Fellini – La Dolce Vita, in which the protagonists Anita Ekberg and Marcello Mastroiani bathed in the fountain. The director in this postwar movie celebrated carefree life in Rome in the 50′s of 20th century.

The people use to throw coins into the fountain – one coin to fulfill the wishes and another one for their return to Rome. Another legend says that when you drop a coin into the fountain, you will meet your true love in Rome, and if you drop more, you’ll have in Rome a happy marriage.