The London eye – the best view of London | United Kingdom 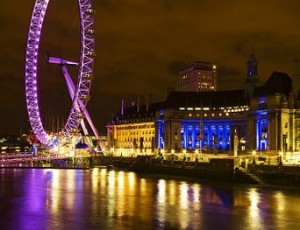 The London Skyline is one that is known all over the World with ancient buildings such as the Tower of London and the Palace of Westminster instantly recognisable. While new modern tourist destinations such as Dubai or Abu Dhabi appear the fashionable choice, with Dubai Hotels among the most grand in the world, there is still a certain historical charm about the ancient Skyline of London.

Having said that a relatively new kid on the block has already firmly established itself as one of London’s most recognisable landmarks among its elder neighbours and is also now a top tourist attraction. I am, of course, talking about the London Eye.

London Eye is located at the western end of Jubilee Gardens, on the South Bank of the River Thames between Westminster Bridge and Hungerford Bridge. When it was built in 1999 to mark the millennium it was the tallest Ferris wheel in the world, though it now has to be content with being the tallest wheel in Europe after the Star of Nanchang (2006) and Singapore Flyer (2008) were subsequently built.

London Eye is now the most popular paid tourist attraction in the United Kingdom, with more than 3.5million visitors per year. It contains 32 air conditioned capsules with one complete revolution taking about 30 minutes. It offers visitors an awe inspiring view of the city of London, which can help you get your bearing if you are planning on an extended stay in the City.

London Eye also plays a central role to the City’s New Year celebrations, with hundreds of fireworks flying off the structure on the stroke of midnight. It is also decorated to mark special occasions such as the recent Royal Wedding between Prince William and Kate Middleton and will also carry the Olympic emblem throughout next summer’s tournament, hosted of course by London.

So if you are planning your trip to England’s capital, as well as looking at the finest London Hotels and restaurants, make sure you have booked you place on a top tourist attraction, the London Eye.