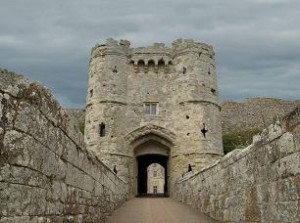 Carisbrooke Castle is situated on the outskirts of Newport, Isle of Wight in England. Castle, which history is more than a thousand years old, offers an unforgettable experience in the form of preserved buildings, interesting museums and inspiring gardens.

Carisbrooke Castle is located in a strategically advantageous small hill. In the castle grounds were found remnants of a building of 3rd century, which had Roman style. In the 10th century, the fortification was built around the hills to protect from attacks of the Vikings. In the 11th century, the Normans used this fortification and built a strong castle. Over the next few centuries, the castle was extended and gradually grew.

The last descendant of the Redvers family, Countess Isabella, sold the Carisbrooke Castle to King Edward I in 1293, and so the castle became a royal property. The constant fear of French or Spanish invasions forced more and more owners to build more and more stronger castle. In 1601, a strong fortification has been completed. But there was never any assault occurred at Carisbrooke. Therefore, the castle was used as prison. The most famous prisoner was King Charles I, who was imprisoned for nearly a year here, and at least twice he tried to escape. Charles I was finally executed in London on the 30th January 1649.

Carisbrooke Castle was the seat of governor of the island until 1944.

Today the castle houses an exhibition on the history of the Isle of Wight. Museum was first opened in 1898 by Princess Beatrice, who was the youngest daughter of Queen Victoria. Her husband became governor of the island, and after his death, Beatrice took over this function. She opened the museum in memory of her husband. The first exhibition was dedicated to King Charles I. In the 20 century, the collection gradually grew to archaeological finds on the island and another, mainly medieval artifacts. Visitors will love the beautiful and colorful garden of Princess Beatrice. In 2009 a garden was restored.

Donkeys at the castle
For hundreds of years, donkeys helped get water to the Carisbrooke Castle, so you can also see the demonstrations of the donkeys at work here.