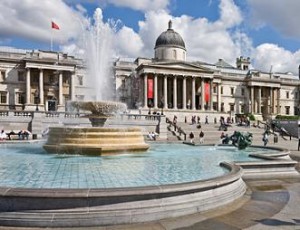 Trafalgar Square is the vibrant heart of London and the best starting point for exploration of its central part – right in the neighbourhood there is the government district of Whitehall with the British Parliament and is also close to Buckingham Palace and Westminster Abbey. You can get here by underground with lines Bakerloo or Northern, from the Charing Cross station. Trafalgar Square also serves as a stop for many day and night buses and also for well-known red double-deckers that offer sightseeing tours.

The name of this largest public space in London come from the sea Battle of Trafalgar, where on 21 October 1805 the legendary Admiral Horatio Nelson won the battle over the French fleet. In the middle of Trafalgar Square you can find Nelson’s Column, which is surrounded by fountains and four huge bronze statues of lions. At the top of the pillar there is a statue of Lord Nelson, who commanded the British navy at the Battle of Trafalgar.

On the north side there is the National Gallery. South of it is the Church of St. Martin-in-the-Fields. At each corner of Trafalgar Square there is a plinth with statues of George IV, Henry Havelock, and Sir Charles James Napier. The fourth plinth has temporary exhibitions.

Trafalgar Square is also famous as the home of hundreds of pigeons which were feeding by the inhabitants of London for centuries. But few years ago it was forbidden, because birds droppings damaged the local sights. Another tradition which became a familiar is the ritual with preparing the Christmas tree. It is imported from Oslo, Norway, who send it each year as a gift to help the Nordic country during the World War II.

« Bonn – the first capital of Germany and birthplace of Ludwig van Beethoven
Carvoeiro – the most fantastic beaches in the Algarve, Portugal »